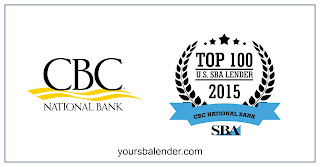 “It is gratifying as a community bank to be ranked among the top 100 most active SBA lenders,” said Durand Childers, executive vice president and managing director of CBC’s SBA lending division. “We have built a very strong SBA lending franchise in Florida, where CBC National Bank has been the No. 1 SBA lender among community banks headquartered in the state for the past three years, and we’re looking to replicate that success in Georgia.”

“Across the states and major metropolitan areas in which we operate, we have a network of dedicated, highly skilled SBA lenders who will continue to serve the needs of the growing marketplace for SBA loans,” said Childers.
About CBC National Bank