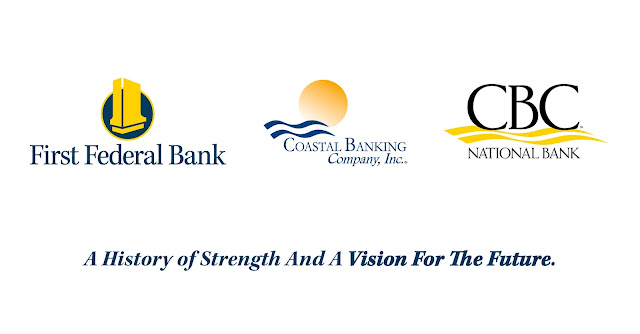 CBC has been merged with and into First Federal. The merger adds full-service banking offices in Fernandina Beach, Ocala, and The Villages, Fla., and Beaufort and Port Royal, S.C., mortgage lending offices in Florida, across the Southeast and Midwest, and both SBA and USDA lending offices across Florida and in multiple states. In addition to increased influence in Nassau County, First Federal gains 10,000 customers, approximately $600 million in assets, $425 million in deposits, and $400 million in gross loans.

“The merger with CBC allows First Federal to grow our presence, customer base and range of products and services in Nassau County and in other vibrant, economically strong markets in both Florida and South Carolina, as well as add mortgage, SBA and USDA lending offices in numerous states,” said Keith Leibfried, president and chief executive officer of First Federal. “We couldn’t be more pleased to welcome CBC’s employees and customers to First Federal, and we look forward to serving the full range of banking and lending needs of all of our customers as we continue to integrate CBC’s operations into First Federal.”

First Federal will work to integrate CBC systems, processes, products and services over the next several months. The conversion is expected to be complete in August. CBC customers are encouraged to continue banking as they normally do and will receive further information this summer.

About First Federal
First Federal Bank of Florida is a community bank founded in the heart of North Florida in 1962. Today, First Federal is a $2 billion-asset institution offering a full line of personal and business financial solutions, services and loans through full-service banking offices in Florida’s Panhandle, North Central Florida, and coastal South Carolina. In addition, First Federal has mortgage lending offices across the Southeast and Midwest, and SBA and USDA lending offices throughout Florida and in multiple states. First Federal is a mutual savings bank and continues to receive a “5-Star, Superior” financial rating from BauerFinancial, Inc., of Coral Gables, Fla. For more information, visit www.ffbf.com.

On Nov. 7, 2017, First Federal Bancorp Inc., the holding company of First Federal Bank of Florida, based in Lake City, Fla., announced a definitive merger agreement to acquire Coastal Banking Company Inc. and CBC National Bank. Upon completion of the merger, First Federal will pay $21.50 per share in cash for each Coastal Banking Company common share and stock option outstanding in a transaction valued at $83.2 million. Pending regulatory approval, the merger is expected to be completed in the second quarter.

“We are gratified and excited to have taken another significant step toward our partnership with First Federal,” said Michael G. Sanchez, chairman and chief executive officer. “The combination of our two organizations, including the vibrant markets we serve, the full array of personal and business financial services and products, and the knowledgeable, personable staff of both companies, will provide our customers with a new level of convenience, service and choice.”

First Federal Bank of Florida is a community bank founded in the heart of North Florida in 1962. Today, First Federal is a $1.5 billion-asset institution offering a full line of personal and business financial solutions, loans, and services from Florida’s Panhandle to the First Coast. First Federal is a mutual savings bank and continues to receive a “5-Star, Superior” financial rating from BauerFinancial Inc. For more information, visit www.ffbf.com. 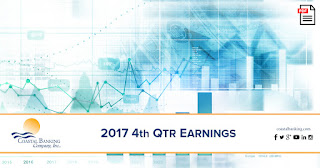 Under terms of the definitive merger agreement between FFBI and CBCO, FFBI will pay $21.50 per share in cash for each CBCO common share and stock option outstanding in a transaction valued at $83.2 million plus the repayment of $8.2 million of debt. The merger agreement has been unanimously approved by the Boards of Directors of both FFBI and CBCO and is subject to CBCO shareholder approval, customary closing conditions, and regulatory approval and is expected to close late in the first quarter of 2018.

“We are delighted to announce this partnership with CBC National Bank,” said Keith Leibfried, President and CEO of First Federal. “CBC has built a strong reputation in the markets they serve and we look forward to continuing that tradition. We share common values and traits with CBC and want to extend a warm welcome to CBC employees, customers, and the communities they serve.”

“This partnership with First Federal is a great fit for our customers and the communities we serve,” said Mike Sanchez, Chairman & CEO of Coastal Banking Company, Inc. “Our team will be able to build on the strength and stability of First Federal and work together in providing our customers with the convenience of 16 additional branch locations and a greater level of service and benefits.”

First Federal Bank of Florida is a community bank founded in the heart of North Florida in 1962. Today, First Federal is a $1.5 billion-asset institution offering a full line of personal and business financial solutions, loans, and services from Florida’s Panhandle to the First Coast. First Federal is a mutual savings bank and continues to receive a “5-Star, Superior” financial rating from BauerFinancial, Inc., of Coral Gables, FL. For more information, visit www.ffbf.com.

Important Information for Investors and Shareholders
This communication relates to the proposed merger transaction involving FFBI, First Federal, CBCO, and CBC and does not constitute an offer to sell or the solicitation to buy any securities or solicitation of any vote or proxy.  A definitive proxy statement will be mailed to shareholders of CBCO.  Before making any voting or investment decision, investors and security holders of CBCO are urged to read the proxy statement and other documents in their entirety when they become available because they will contain important information about FFBI, First Federal, CBCO and CBC.  Investors and security holders will be able to obtain free copies of the proxy statement (when available) and other documents from CBCO, copies of which will be available free of charge on CBCO’s website or by contacting CBCO.

FFBI, First Federal, CBCO and CBC, their respective directors and executive officers and other members of management and employees may be considered participants in the solicitation of proxies in connection with the proposed transaction.  Information on the directors and executive officers of CBCO is set forth in its proxy statement for its 2017 annual meeting of shareholders, which was posted on CBCO’s website.  Other information regarding the participants and the proxy solicitation and a description of their direct and indirect interests, by security holdings or otherwise, will be contained in the proxy statement and other relevant materials to be posted on CBCO’s website when they become available.


This communication contains "forward-looking statements" within the meaning of Section 27A of the Securities Act of 1933 and Section 21E of the Securities Exchange Act of 1934, and is intended to be protected by the safe harbor provided by the same. Forward-looking statements can be identified by the use of the words "anticipate," "expect," "intend," "estimate," "target," and words of similar import. Forward-looking statements are not historical facts but instead express only management's beliefs regarding future results or events, many of which, by their nature, are inherently uncertain and outside of management's control. It is possible that actual results and outcomes may differ, possibly materially, from the anticipated results or outcomes indicated in these forward-looking statements. Risks and uncertainties to which these statements are subject include, but are not limited to, the following:; the timing to consummate the proposed merger; the risk that a condition to closing of the proposed merger may not be satisfied; the parties' ability to achieve the synergies and value creation contemplated by the proposed merger; the parties' ability to promptly and effectively integrate the businesses of First Federal and Coastal; the diversion of management time on issues related to the merger; the failure to consummate or delay in consummating the merger for other reasons; changes in laws or regulations; and changes in general economic conditions.  No assurances can be given that any of the events anticipated by the forward-looking statements will transpire or occur, or if any of them do so, what impact they will have on the results of operations or financial condition of First Federal and Coastal. Forward-looking statements are made only as of the date of this communication, and neither First Federal nor Coastal undertakes any obligation to update any forward-looking statements contained herein to reflect events or conditions after the date hereof. 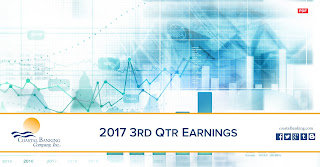 About Coastal Banking Company Inc. Coastal Banking Company Inc. is the $650.8 million-asset bank holding company of CBC National Bank, headquartered in Fernandina Beach, Fla., which provides a full range of consumer and business banking services through full-service banking offices in Fernandina Beach, Ocala, and The Villages, Fla., and Beaufort and Port Royal, S.C. The company's residential mortgage banking division, headquartered in Atlanta, includes both traditional retail and wholesale lending groups, which together have lending offices in Florida, Georgia, Maryland, South Carolina, North Carolina, Illinois, Ohio, and Tennessee. The company's SBA lending division operates under SBA's delegated authority, originating SBA, USDA and FSA loans throughout the southeastern United States. Headquartered in Fernandina Beach, its offices are located in Jacksonville, Ft. Myers, Tampa and Vero Beach, Fla., Greensboro, NC, Atlanta and Tifton, Ga., and Beaufort. The company's common stock is publicly traded on the OTCQX Best Market under the symbol CBCO. The company was named to the OTCQX® Best 50 in both 2015 and 2016, an annual ranking of the top 50 U.S. and international companies traded on the OTCQX Best Market, based on equal weighting of one-year return and average daily dollar volume growth.
Posted by Unknown at 5:12 PM 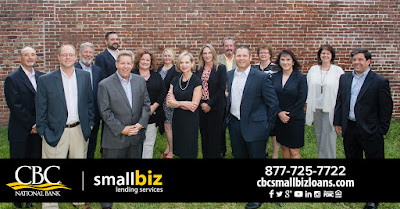 FERNANDINA BEACH, Fla., September 26, 2017 – CBC National Bank, headquartered in Fernandina Beach and with branches in Fernandina Beach, Ocala and The Villages, Fla., and Beaufort and Port Royal, S.C., today announced that in June its SBA lending division surpassed the $300 million mark in loans to small businesses. As of June 30, it had reached $314 million.

CBC continues to be recognized as one of the U.S. Small Business Administration’s highest ranked community bank lenders in Florida, recently ranking No. 2 in total dollar volume and number of loans. CBC has also bolstered its government guaranteed lending group in 2017, with specific focus on United States Department of Agriculture (USDA) Business and Industry loans.
Through the USDA program, CBC can offer commercial and small business loans for most types of businesses, as well as investment properties, multi-use office complexes, etc. If the loan recipient meets necessary criteria, the loan is guaranteed by the federal government.

“We continue to strengthen our SBA lending division in order to serve small businesses across the Southeast by providing them the capital they need to grow their businesses,” said Durand Childers, president of CBC’s SBA lending division. “Building our government guaranteed lending group to now include USDA Business and Industry loans allows us to offer a more diversified lending product specific to the small businesses in the communities we serve.” 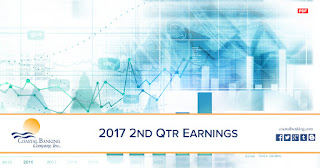 On a linked-quarter basis, the $2.11 million of net income in the second quarter of 2017 increased significantly from first quarter 2017 net income of $1.45 million, or $0.38 diluted earnings per common share.

Read More: Click Here To Read Full Release
Posted by Unknown at 9:06 AM