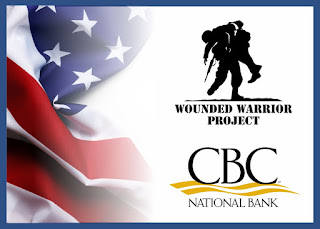 BEAUFORT, S.C., Sept. 29, 2015 – Coastal Banking Company Inc. (OTCQX:CBCO), the holding company of CBC National Bank, which operates branches in Beaufort and Port Royal, S.C., and Fernandina Beach, Fla., today announced that CBC National Bank has made a donation to the Wounded Warrior Project in honor of its employees.

To celebrate the recent $10 billion funding milestone reached by its mortgage division, CBC National Bank held a unique raffle set up to provide a donation to the Wounded Warrior Project. For $5 per entry, CBC Bank employees could enter to win the grand prize – to have their August mortgage or rent payment paid by the bank.

However, in the spirit of the event, the winner – Samantha Ward, an assistant vice president and underwriting manager, decided to add her mortgage payment to the total amount raised, bringing the total donation to $3,500.

“We’re very pleased to be able to make a meaningful donation to an organization that does so much good for the brave men and women who have served our country,” said Charles Wagner, president of CBC National Bank. “The raffle was a fun way to engage our employees in an activity with a serious purpose to celebrate the success of our mortgage division and celebrate the quality of our employees across the Company. And the fact that Samantha Ward decided to add her prize to the total shows the level of generosity and character among our employees.”